This image introduces that same process to a new medium. It started as a partial figure in an 11×14″ sketchbook. I extended the original drawing to map out the whole figure and then transferred it to canvas. The entire background and much of the figure was improvised directly on the canvas.

As I brainstormed on a title for this painting, a name–or at least part of it–popped into my head. It sounded familiar. I did an online search and realized a sort of connection. When my wife heard the name, she immediately seized upon it, not knowing the story behind it.

So here we have it: “Lysistrata Returns.” Whatever the tale once was, from the look on her face, the tone has clearly changed.

Leonardo did it, Van Gogh did it, and Picasso did it, too. All of them painted over previous works that they did not consider worth keeping. Practice makes perfect, but not all practice turns out perfectly. There’s no point in wasting a good painting surface.

Pastelist and colorist Casey Klahn takes no prisoners. He’ll paint a hundred landscapes (or florals or portraits), weed out the 25 he likes the least, wipe them off, and then paint over them to make it an even hundred again. “Dinotopia” artist James Gurney paints over his gouache or casein work in every sketchbook until he’s happy with the whole book.

Certain media aren’t conducive to reworking the surface, but almost every medium can serve as an underpainting for something else. I prefer to gesso over acrylic paintings that served their purpose but don’t need to be kept. Sometimes I don’t cover them completely, allowing the randomness of the half-hidden work to show through the white gesso.

Pastels are perfect for this sort of thing. I have often wiped off entire paintings and started the same subject over again on the same surface, with much better results. Something about the ghost image left behind allows me to move more freely the second/third/fourth time. Sometimes, the subject no longer appeals to me, so I paint something completely different over the ghost image.

In any case. Since Tuesday, I have reclaimed another six canvases that are now ready for new work. I have my eye on a few more, too, some of them big ones. Hmm…like that one there, for example…

A friend has graciously invited us to stay in her house in California’s famed Napa Valley. Every morning, we awaken to a beautiful dawn. On any given day, we might see low clouds, patchy fog, or a bright blue sky. The clouds are usually long gone by noon, and the midday heat is a bit easier to take when one can sit inside where it’s cooler, and look out the large windows. Evenings can be brisk and breezy. A couple of times, we even built a fire in the fire pit so we could sit outside and watch the stars appear.

The backyard here is actually a small vineyard surrounded by classic Napa trees: pines, redwoods, oaks, maples and eucalyptus. I’m nursing a bad case of poison oak just now, but I can still paint, and I’m grateful for this marvelous view! This painting was a very quick study, focusing on shadows and capturing the various greens.

I saw the marking for the Monticello Rocks on Google Maps and traced the route from where we are staying. It just sounded cool. “Monticello Rocks.” Ever the adventurer, Ping was game. Thus, we set forth.

Anticipation gripped us like a cheap pair of shorts that had shrunk in the dryer. Every turn in the road brought us closer, closer, closer…WAIT! I think those are the rocks! YES! Rocks, they are! Ah, the excitement, the THRILL of seeing the Monticello Rocks for the very first time! I’ll never for-…

We couldn’t get to them. We couldn’t even turn around on that road. There was nothing left but to continue forward. We did.

Neither of us saw any more rocks. Okay, that’s not entirely true, there was the “Old Man Rock” a bit later that did, indeed, have a nose larger than my own. So, that’s something.

We laughed and laughed about the Epic Quest for the Monticello Rocks. 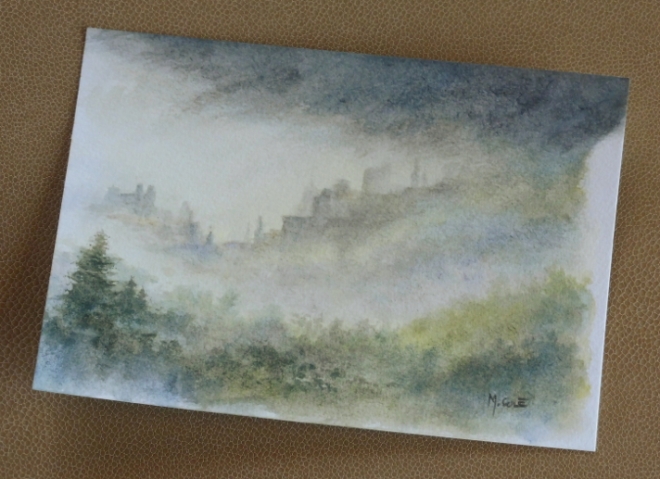 We got up to have coffee, like we do pretty much every morning. On this day, though, everything was different. We weren’t in our usual house in Beitou. We found ourselves looking out the large, east-facing glass windows of a double door. A heavy overcast hung low overhead, obscuring even the foothills.

But that is not what made us gasp in wonder.

The sun was breaking through a hole in the cloud cover, somewhere to the northeast on this early summer day. It cast a beam through the mist, lighting up the edges of the trees, tracing the rise of the far ridges that climbed up into the gloom overhead.

A vision emerged momentarily from the mist, then faded from view as the clouds began to roil. We stared. The shaft of light grew stronger, glancing off of this and that, though we could not easily tell what we saw. As the light shifted again, we seemed to be gazing at a castle whose walls and towers were only just visible in the hazy dawn. A castle? No, a whole city, perhaps!

The sun continued to rise, widening the hole in the clouds, illuminating the mists in the vales between the ridgelines. The entire fairy city came into focus for a few brief moments: great walls and towers, a cluster of houses, a massive gate, perhaps. It was all there. Still, at this distance, we questioned whether we were seeing clearly.

The overcast began to lift, too light now to obscure the view. When we looked again, the fairy city had vanished.

Was it ever there? We think so.

Later in the day, I did my best to paint it from memory.

Just finished a small sketch this morning. Made me wonder what this thing does–besides float, of course.

Back in the late 2100s, Beryl Thwackenheimer devised a means by which to levitate a solid object by harnessing the energy shifts caused by variances in luminescence. Subtle changes in cloud formations, or even the appearance of a meteor in the night sky could actually cause the object to counteract gravity. The technique proved so effective that her first successful prototype got away from her before she had completed building it. These days, virtually every appliance and vehicle uses some version of the Thwackenheimer luminescence converter.

A flaw in Thwackenheimer’s system design causes the unit to repel any approaching object (like the ground, an ornithopter, or even a net). The extreme efficiency of this function has rendered impossible any attempts at recovery. It’s been a hundred and fifty years now, and fortunately, no one’s transporter has been damaged by the rogue prototype.

It’s still up there somewhere. No one can catch it and bring it down.

NEW! Click HERE to purchase prints or original art from my gallery at Fine Art America!